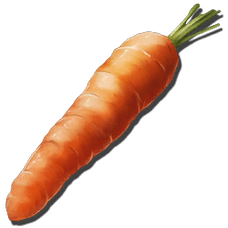 Crops in the game. It is harvested from a plant grown from a Rockarrot Seed on a medium or large crop plot. A Rockarrot plant can only hold up to 150 Rockarrots in a crop plot at a time.

This item expires very quickly once removed from the crop plot in a similar fashion to Raw Prime Meat, but its durability can be extended by a short time using a Preserving Bin or Refrigerator. It is recommended not to pick Rockarrots from a crop plot until ready to use. Also like Raw Prime Meat Rockarrots and the other Crops are better than berries for taming herbivores. Each Vegetable usually fills 40 food points of a dino.

. On Ragnarok /Valguero some wild plants can be found in the Highlands

.and can be picked up with the Use key (E,

). They are a great source of early game food.

The Rockarrot is needed for different cooking Recipes as well as

The Rockarrot is the preferred food of the