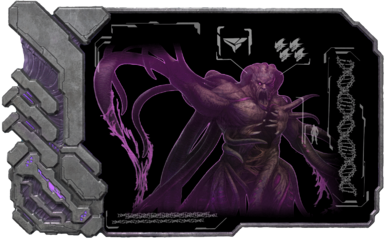 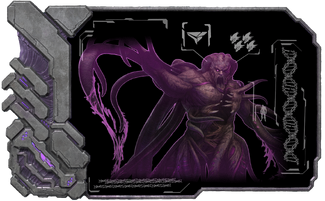 None
Habitat
Rockwell Arena, accessible via the Obelisks and/or the Terminal on Aberration

Rockwell is the boss in ARK: Survival Evolved's Expansion Pack Aberration and one of the two primary antagonists of the ARK storyline. He was one of the few explorers who had written Explorer Notes containing recipes before he went insane "ascending" with his Edmundium (simply known to villagers as

Element) experiment, as evidenced by his notes.

The place to activate the teleporter to the Rockwell Arena depends on currently unknown conditions. For some survivors only the Terminal shows the summon icons, the survivors can see them also in the Obelisks on the surface or in loot crates.

He stands at 142 meters tall, with his tentacles being 160 meters long on the surface.

Edmund Rockwell is a survivor from the main story of ARK. He was Helena's close friend on The Island, both of them sharing a common passion for science and tea. When referring to his past life, he seems to be from Victorian Era England (19th century), derived from his tales of hunting wildlife in Africa and India - territories under British authority at the time.

While on The Island, he settled tensions between tribes by acting as a neutral party and mediator during negotiations; his successes with diplomacy earned him a reputation of respect and renown. He would later use this reputation to acquire test subjects for his Rockwell Recipes - some willing, and some not so willing. Rockwell was also one of the first survivors to discover an artifact, and likely the very first to realise their significance and roles within the ARK. Once he became aware of their significance, he once again used his influence to get the tribes of the island to recover many of these artifacts for him.

When Helena and Mei-Yin investigated one of the Obelisks without informing Rockwell, he took it as a sign of betrayal, believing that Helena was trying to get one over on him and keep the secrets she may discover to herself. He formed an alliance with the Roman general, Gaius Nerva, believing that the might of Gaius' tribe, the New Legion, was his best chance at uncovering the mystery of the ARK before anyone else. He eventually made it to The Island's Tek cave and discovered the valuable resource of Element, giving it the name Edmundium after himself, and was transported to the Scorched Earth ARK.

During his travels in the desert, he began to run experiments on the limited amount of Element samples he recovered from The Island's Tek cave. He also began to grow increasingly wary of other survivors, feeling a particular hatred to those he deemed too ignorant to be worthy of the ARK's secrets. Eventually, Rockwell reunited with Helena; still harboring resentment toward her, but appearing outwardly co-operative. Together, they left the Scorched Earth ARK with the help of Raia, ending up on Aberration.

Soon after arriving on the Aberration ARK, Rockwell was introduced to Diana and Santiago's tribe; he disapproved of their use of Element to construct suits of advanced Tek armor, but appreciated the power they provided the wearer. He talked his way into the company of the tribe's scientists and researchers, and began his feverish obsession with Element again, this time experimenting on small critters and his own blood. Eventually, his derangement reached a peak when he injected liquid element into his own body, believing that it would trigger his ascension to godhood. He instead mutated into a hideous abomination, attacking the tribe, killing Diana in the process, and fleeing deeper into the ARK. He seemingly met his end when he was confronted by Helena and Mei-Yin in combat, but survived to become the de facto Overseer of the Aberration ARK.

When the Aberration ARK fell onto Earth, Rockwell makes plans to gather an army by making the Genesis Simulation a factory for generating survivors that rally to his cause, he corrupt a part of the genesis ship and create his own creatures like the Shadowmane and the Noglin, his goal is to conquer a habitable planet to corrupt it like the corrupt ring of the ship.

The Rockwell always spawns with the same color scheme and has no color regions.

This means it is currently impossible to make alterations to the Rockwell's colors.