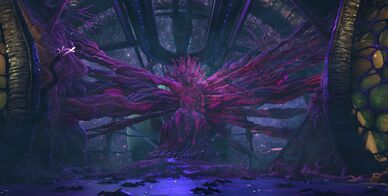 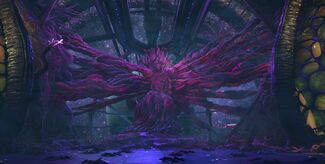 Rockwell Prime is the final Boss of Genesis: Part 2, and of the first games storyline. It is the final form of Sir Edmund Rockwell, the previous being

Comparative to his previous form, Rockwell, Rockwell Prime is much smaller and meatier. Listed below are all his features in detail:

Rockwell Prime can only be found in Terminus mission, started via the Mission Terminal underneath his heart inside Rockwell's Innards.

The Rockwell Prime always spawns with the same color scheme and has no color regions.

This means it is currently impossible to make alterations to the Rockwell Prime's colors.

Rockwell Prime is a tough boss to deal with and you will need to have powerful tames and items to take it down.

Eliminate all the Super Tentacles (easily seen by its nearly identical appearance to that of Aberration) whilst watching out for the other nearby tentacle that spawns endlessly. If you have brought other dino, have them constantly attack anything that moves. After eliminating the super tentacle, attempt to attack the first node that becomes vulnerable until he starts to mock at you for your attempt.

HLN-A will unlock the middle section of the ship, releasing number of

Exo-Mek with Hypercharge attachment based on how many survivors are present at the start of battle. The lasers from Exo-Mek are the only way of beating Rockwell Node, and whilst riding on it confers you invulnerable to any form of attack, it will drain the energy over time or while being attacked by anything and everything, forcing the Exo-Mek to be unusable for a while if its fully drained. It will slowly replenish energy over time if its not ridden regardless whether or not it is fully drained. To prevent your mek from being fully drained, exit your Exo-Mek before its energy level hits zero.

Rinse and repeat for the other node, but watch for random acid pool projectile that forms temporary AoE acidic field, which cause health damage to both you and any mounted dino on it. Moreover,

Summoner will begin to appear, firing projectiles that spawns in

Corrupted Survivor that needs to be killed quickly. Be mindful for his constant tentacle spikes, as it will deal a lot of damage.

Upon eliminating all Rockwell Nodes, the

Exo-Mek will become non-functional, and Rockwell Prime truly emerges out. More tentacle will begin to emerge, but

Summoner will stop appearing (disappears if they are still around) from the ship. Acidic projectiles are spat on more frequently and in clusters, and getting too close to him while riding on a dino confers a huge electricity discharge after a few seconds, preventing you from mounting on the dino. Use rifles and any ranged weapon to weaken him, whilst watching out for his constant tentacles and AoE acidic field.

Upon reaching 0 Health, Rockwell Prime will drop down, staggered whilst HLN-A activates the energy reserves to power up the Exo-Mek for one last blast. You only have 1.45 minute to deposit whatever items you had into dino or lose it ), whistle dino to passive (so they dont walk off edge when they port back to innards as you end up in a dead mode respawning at a bed ), etc... and then fire the hyperbeam at Rockwell with Exo-Mek (everyone must be firing at him to count) until the battle ends (cutscene), otherwise the fight will end in a failure.

In the final battle, players should be armed to the teeth in terms of high durability and quality armor and high quality-tier weapons before entering the fight. For armor, players should have flak, riot, or tek armor sets as well as the free tek suit for a last resort set of armor. In bringing weapons, players must bring a weapon that does high damage per hit, and one that does high dps. For high hitting weapons, these include tek bows, tek swords, and pump action shotguns. In dps weapons, tek rifles, miniguns, and tek pistols, and tek claws are some choices.

In the final battle, it is fitting that players should pool a variety of mounts that originated from the many maps of ARK. However, note that the space to bring creatures to the arena is not big enough to fit 20 of any creatures, so managing space is important. Also note that bringing 20 creatures that are just as big as the Rex is near impossible due to the small space.

Tames from the Island