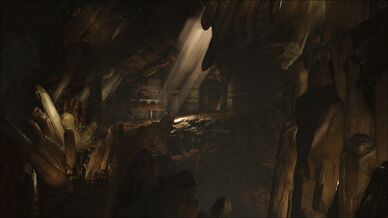 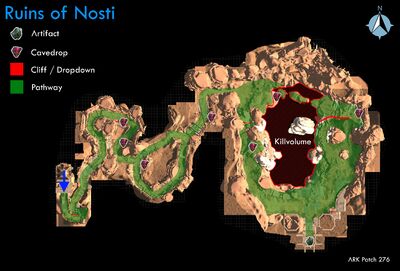 The Ruins of Nosti (more commonly referred to as The Church Cave) is a Cave underneath a ruined building on the Scorched Earth map. The ruins above are a forgotten city full of domed buildings and pillars in the south east of the map in the dunes. The largest domed building being the entrance.

The cave that is the Ruins of Nosti begins with a descent down beneath the surface. This location dubbed as the entrance consists of the Church all the way down to where the path splits into two, where it then becomes the descent.

Artifact of the Destroyer and a

Scorched Sword Skin can be found in the artifact crate.

Mantis. Survivors should be well-prepared before tackling this cave. Mega Rabies will come from the bats, so make some