Santiago (full name Santiago Camacho in the explorer notes, da Costa in the Ark 2 trailer) is a Terran Federation hacker. His knowledge of how to weaponize Element makes him the backbone of his Tek tribe. Ever since he woke up on the Aberrant ARK and learned about the fate of Earth, Santiago has been driven by learning more about Element's effects on planets. Specifically, he wants to understand how Element could ruin Earth.

A clone of the Genesis 2 Santiago returns in ARK 2.

Santiago grew up in a country occupied by the Terran Federation. Because of that, he hates the faction's rival, the United Republic of Earth. On a personal level, he finds them to be loud mouthed, overly self-satisfied, and naïve people. In his former life as a hacker and data terrorist, Santiago has undertaken many classified espionage missions acting against various corporations to test and develop his skills.  After waking up on the ARK, those skills quickly earned him a place as the head engineer for the Tek tribe. Upon arriving on an Element ravaged Earth, Santiago wants to know how a harmless chemical can cause global devastation.

Santiago is a calm, sarcastic, creative survivor who wants everyone to be safe. He loves messing with people and sees himself as a jerk but also understands and respects the reasoning of other people, as shown in his response to Helena's reluctance to travel with the Tek survivors down to Earth after the destruction she brought through Rockwell. Santiago is considered the brains of the tribe, always coming up with a grand project to either escape the ARKs, or fight against titans. He is quick at analyzing and applying facts. His witty, sarcastic style of communication is widely noted.

He also seems to be a perfectionist, as he wants his coding to be spot on to ensure his projects function flawlessly. For example, he becomes concerned about the Gateway project being 8.93 meters off its intended target, and worries over a simulation of the Mega Mek's fusion process when the base Mek's reactors melt down over a problem in the energy flow.

When Santiago and the other survivors reach Earth and find it barren, Santiago remains calm and level headed. His focus is on surviving the challenging situation rather than panicking like many others would. He takes initiative to lead the tribe to get them back together.

Santiago eventually deduces that the Element poisoning Earth likely came from Tek warfare based on weapons he designed. He feels guilty for causing such destruction, even though he did so unwittingly.

The End of Santiago[edit | edit source]

When the Titans and Corrupted Horde attack Camp Omega, Santiago we know from Aberration/Extinction willingly sacrifices himself to allow the other survivors to escape. He is later buried by Diana.

The Genesis 2 Santiago gets killed on the Genesis 2 ship by another member of the crew and his engrammic matrix is saved by Uma into the ships data base. 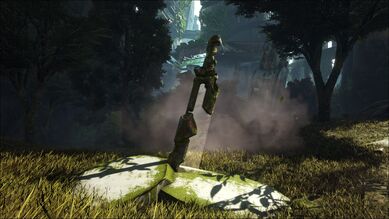 Being the brains of one of the most advanced tribe on the ARKs, Santiago's understanding of technology is his most dominant survival trait. Where he may look like no threat at all, he can create armor that can withstand trees and boulders while running at mach speeds. On Aberration, he is capable of hacking an ARK, a piece of technology that should not be within any survivor's understanding. Being an engineer and hacker, Santiago is also capable of making weapons based off of element, a substance he worked with extensively before coming to the ARK. In an addendum of his eighth note, he notes he can make Element-based rockets, a new type of jet called orbital strike fighters, and a massive orbital carrier ship.

Whether forging deadly weapons from simple minerals in a certain area or making robots that break the limits of physics, he is a master of weaponry. The Meks, Santiago's masterpiece weapon, show for how deadly his intelligence can be. He even has learned to reverse engineer robots from just their data processor. Even the Mega Mek, Santiago's greatest weapon, is a result of him fiddling with the Hunter Killer Enforcer robot's teleportation technology. The result of his work? He built robots that can make the biggest creatures retreat with their tail between their legs.

What sets him apart from other survivors is his knowledge of Element, a futuristic substance that can render early 21st century technology completely obsolete and make it look like a Stone Age tool in comparison to Tek technology. He understands that element can grow in tiny amounts so small that according to him, a person can ignore it completely.