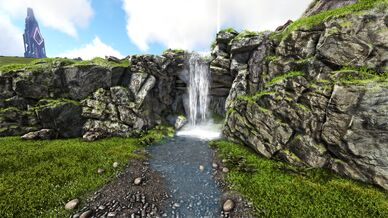 Scotland Waterfall Cave is a cave in Scotland.

A small-medium cave in Scotland thinly veiled under a waterfall entrance, consisting of metal deposits, and even a water hole. It's a great place for a base. However, if making a tribe with even 5 people and about 10 tames each will get fairly cramped in here. However, it is perfect for defense as there is only 1 already hidden and easily defended way in, and the metal amount is decent. Great for farmers too, because of the water. It's also close to great locations such as the Dragonmalte Trench and the Redwoods.

This cave has no Creature Spawns, however wild creatures from the surrounding area could easily wander in if the cave isn't settled.