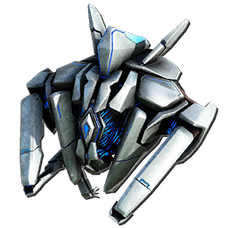 The Scout Remote is one of the items in ARK: Survival Evolved's DLC Extinction.

The Scout Remote can be deployed by pressing Lmb,

while it is held. It is recommended to deploy this in an open area. After a few seconds, a pair of binoculars will appear in the survivor's hand and a

Scout will appear. The survivor will be able to directly control the

Scout can be returned to the Inventory by pressing Rmb,

or by waiting out the cooldown. The

Scout itself can also heal the

Mek at a quick rate.

Do not use when you have a shoulder mount while on Console currently, you will not be able to exit the scout remote by using the "Dismount" command. Fly the drone out of range if you become stuck in this situation.

Curiously, the Binoculars used for it's remote control, would later be added as their own separate item in Genesis: Part 1, as the item Electronic Binoculars. They have different functions, however.