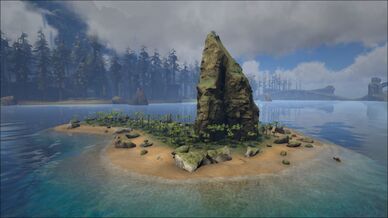 Secluded Island is a small, unofficially-named island to in the DLC: The Center.

Secluded Island is a narrow but long island between the Southern Jungles and the Redwood Biome. It is immediately west of Skull Island. The island itself is littered with many trees, bushes, rocks, and has one large rocky spire on its northern shore. This island is notable, because no wild creatures will spawn here making it an excellent place for survivors to base out of without fear of the wildlife.

Other than the water around it spawning Pelagornis', it appears that no creatures of any kind actually spawn on the island, making it a safe haven for people who plan to log off. The only worry is the megalodon nearby but they can be avoided by raft or fast aquatic creature. is perfect for making a pvp and pve base because you can put your turrets in the gigant rock.