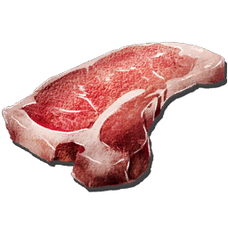 Shadow Steak Saute is a dish in ARK: Survival Evolved. It can be created in a

Consume the Shadow Steak to gain +50 hypothermic and hyperthermic insulation, and 80% reduced weapon recoil for 180 seconds (3 minutes). Contrary to the original description in the recipe, it does not provide improved night vision.

This is very useful for exploring Caves, provides resistance to cold environments and reduces weapon recoil, which is good because shotguns are highly effective in caves and benefit from this perk. It also works greatly when using a Longneck Rifle or a Fabricated Sniper Rifle over large distances, as using this dish and crouching will reduce the movement of the scope to nearly 0.

Be sure to include a Waterskin, Water Jar or Canteen with at least 25% water in the Cooking Pot.