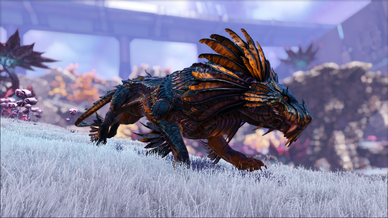 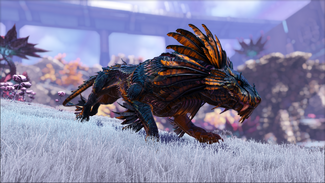 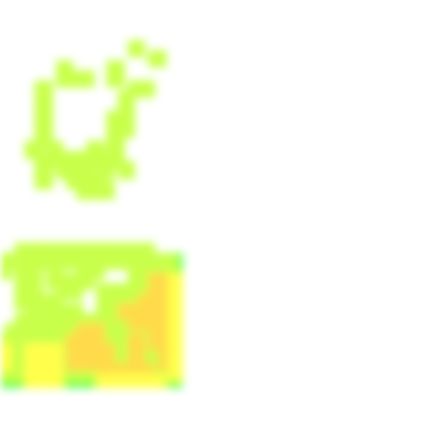 The Shadowmane is a creature in Genesis: Part 2.

Shadowmane travels either alone, or in groups of 3 or more. If they find a target, they will chase after it, teleporting if its unreachable.

The Shadowmane is feline in appearance, and bears a strong resemblance to Lions. Shadowmane have a frill, which is more pronounced among males, the male's frill bear a resemblance to the Lionfish, and Catfish, making it look semi-aquatic. It also features a small finned tail and is a fast swimmer in game.

This section displays the Shadowmane's natural colors and regions. For demonstration, the regions below are colored red over an albino Shadowmane. The colored squares shown underneath each region's description are the colors that the Shadowmane will randomly spawn with to provide an overall range of its natural color scheme. Hover your cursor over a color to display its name and ID.

This section displays the Shadowmane's natural regions. For demonstration, the regions below are colored red over an albino Shadowmane. The colored squares shown underneath each region's description are the colors that the Shadowmane will randomly spawn with to provide an overall range of its natural color scheme. Hover your cursor over a color to display its name and ID.

Region 0 is not used
for this Creature.

This section describes how to fight against the Shadowmane.

Rock Drake, the Shadowmane stalks players using its invisibility, the only two distinct ways to tell if it's stalking someone is via its pawprint, or the distinct faint sound it makes. The Shadowmanes invisibility is not perfect, and similarly to the

Rock Drake, it leaves a faint shimmer around it.

The Shadowmane usually spawn in groups of two to three, making it difficult to engage without many casualties. Running from aggressive Shadowmanes is also not a viable option, as their teleport allows them to keep up with a sprinting survivor easily- even with the benefits of tek gear equipped. Their warp distance seems to be most effective on ground and in water. At a certain point in the sky they cannot follow and will quickly de-aggro. If you're still using the basic Federation Tek Suit, take to the skies above all else to get away or to shoot from afar.

Relying on a powerful ridden tame such as a Rex to take down a group of Shadowmanes is a poor choice since they are capable of stunning a Rex and dismounting the rider. The same goes for essentially any other creature. With this in mind, using a group of tames such as Allosaurus can be more effective, though a dismounted player is at the Shadowmane's mercy if they are in the fray.

Supporting some tanky tames from afar with a ranged weapon such as the Tek Bow or Fabricated Sniper Rifle will ensure the player's safety while dealing optimal damage to take down Shadowmanes.

Shadowmanes are stealthy pack hunters with the capability to teleport to their targets and stun dinos, which will dismount riders. The highest level also gets an alpha boost akin to the Allosaurus, and when factoring in a likely mate boost for the whole pack, they can deal a high amount of damage. All of these factors can make a survivor's first encounter against them to be catastrophic as several tames can not match up to a pack of Shadowmanes, and none of them can escape once the rampage has started.

A single Shadowmane is much less threatening without a pack as their damage drops considerably without a mate boost and alpha bonus, but they can still stun dinos to disrupt the player's control of the fight. They are also incapable of targeting players some distance in the air beyond their teleport range, and since the Federation Tek Suit is provided to all survivors, it is easy for survivors to use this to their advantage to pick them off or escape a tight spot.

Shadowmanes are tamed non-violently, rather than through the usual methods.

Shadowmanes are inactive during the day, and can be seen resting. To tame the creature, you need a filled

with 0.5+ weight fish of any kind. Larger fish seem to tame it faster. (Needs further testing) With the basket in the last slot of your hotbar, carefully approach the Shadowmane while it is asleep (the creature is aggressive) and feed it. Be mindful of other aggressive dinos which will either target the survivor or Shadowmane. It's not yet certain which variable is true, but either the level of the fish or the size of the fish determines how much taming affinity it provides; the larger and/or higher level the fish, the more affinity provided. You will need many filled fish baskets for the tame, so prepare ahead of time.

To reduce the chance of it detecting you, wear a full set of

Ghillie Armor and crouch towards it while its resting (Use

Bug Repellant if possible before attempting in order to deter aggro from the area's several insects.) Try to approach from its sides or rear when approaching with the fish basket to further reduce being detected. If it wakes up while you are close, immediately try to sprint away as the Shadowmane takes a few moments before grabbing any aggro. Be careful if there are other Shadowmanes, as even one Shadowmane being alerted will wake the entire pack up. It's advised to clear out unwanted creatures, including other Shadowmanes, before initiating the tame; they will aggro onto most herbivores such as Stegosaurus and Pachyrhinosaurus, as well as small creatures and corpses.

As soon as it feeds, it will immediately walk elsewhere (they become invisible). Keeping track with the Taming tracking system is vital, as you don't want to be too close when they break out of stealth. If Shadowmane attacks a player, all taming progress is NOT lost and taming effectiveness is NOT reset, progress is only lost when you wake him up even if he doesn't follow you. However, they can attack other creatures without losing taming progress, but lone Shadowmans are likely to die if they attack a pack of Stegos.

The Shadowmane is quite variable in its resting times, though if there is nothing in the area to attract their attention, they seem to rest for at least 20 seconds. It's important to be close enough to capitalize on these resting periods, but far enough away to not get its attention at unwanted times.

Tip: As of right now they seem to keep the resources they gather from dead creatures around them. By bringing them enough victims to feed on they will become encumbered and unable to act, making taming a much easier task. Ovis are an excellent creature to feed it if you have enough disposable sheep, since they harvest for very heavy pelt and can encumber the creature very quickly. Building gates around them to prevent them from walking away invisible is also a good strategy.

All Shadowmanes have a varying amount of natural armor upon being tamed, this effect takes the place of a saddle. The higher the level, the higher the armor generally is.

They also have a momentum-like bar, which increases whenever it attacks a creature, and decays over time. Once filled it can do its special Attack (Hold the Bite button), If this attack does the killing blow the bar will instantly refill and allow another assassination strike

Shadowmanes can get the Hydration buff similar to that of a

Spinosaurus, improving their damage, speed, and health regeneration when in contact with water. This buff lasts for 30 seconds after leaving the water.

Shadowmanes do not take fall damage when using the jump ability, but can occasionally take it during short hops. It's currently unknown why this is the case and is likely a bug.