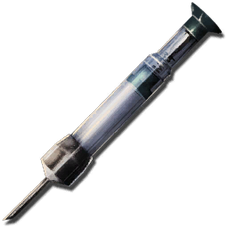 The Shocking Tranquilizer Dart is a type of

Torpor-raising ammunition for use in a

Longneck Rifle. It is twice as effective as the

Tranquilizer Dart for knocking out, but deals no more damage.

Upon impact, the Shocking Tranquilizer Dart deals 26 base damage to the target, which increases with the quality of the rifle it is fired from. The target's torpor will increase by 1200% of the damage dealt instantaneously, as well as an additional 500% of the damage over the next 5 seconds, for a total of 442 Torpor with a 100% Longneck Rifle. It can also stop the player from moving.
Hitting the target with another dart before the first one delivers all of its torpor will stack the effect in terms of time, meaning that if you hit a target a second time while it still has 2 seconds of torpor increase, it will then have 7 seconds of torpor increase.