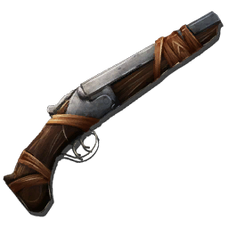 The Shotgun is a ranged weapon in ARK: Survival Evolved. It's a close-combat alternative to the

Longneck Rifle and is unlocked at level 39. While not nearly as accurate as the Longneck, and with very little range, its two barrels allow for two shots before reloading, and the bigger spread of its pellets means that you are more likely to damage a target. These features make it superior to a Longneck at close range, but useless at a distance. Its ability to hit multiple targets at once with a good amount of damage make it best for close quarters combat, where quick target acquisition is necessary (i.e. caving).