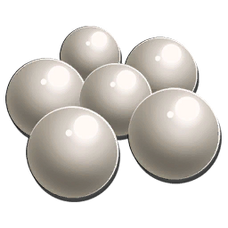 Silica Pearls are a resource in ARK: Survival Evolved. They can be found in the deepest areas of the ocean, in more shallow areas along the icy shores of the snow biome, in the Underwater Caves, in

Giant Beaver Dam, and when harvesting corpses of

Ammonite. They are also obtained from

Phoenix after defecation as silica pearls are in the place of feces for Phoenixes.

Being one of the base Ingredients for

Electronics, Silica Pearls get very important for the technical side of the game.

Silica Pearls are found in the Ocean and in the underwater caves. The Pearls are also found in clams, which are usually found in groups of around 5. There is no tool needed to harvest them, they are picked up by hand. Each clam usually yields between 2 and 4 Pearls. Increasing melee damage percentage won't increase pearls harvested.

Silica Pearls are commonly found under the cold sea of the west area of the map as well as the pond in the north by the peninsula. If the player has fur armor and a flying mount, an easy place to obtain Silica Pearls is the frozen patches of the northwest coast. Clams can be safely harvested by making short incursions into the water to avoid getting too cold, as fur armor "dries" instantly. As all spawns except

Kairuku are uncommon in these areas, this can be performed in relative safety. The Underwater Caves also provide a large amount of Pearls, which can be harvested easily.

Silica Pearls can also be obtained by harvesting corpses of

On The Center map, the Pearls can also be found at the bottom of the inland rivers, and in hot springs around the volcanic island, but these places are inhabited by

On Scorched Earth, Pearls are easily gathered at an Oasis and throughout the riverbed in the middle of the map, where they can be found both in the water and on dry land. A Whip can be used to harvest them quickly. They will sparkle at night making them easy to find.

The following table is valid for harvesting trilobites:

See the interactive Resource Maps for all occurrences in the official maps as well as some Mod maps.

Silica Pearls are an ingredient in the following Crafting recipes: