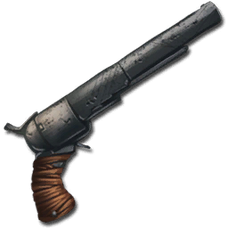 The Simple Pistol is the first gun that you can gain access to, unlockable at level 34. Though boasting less damage per shot than a charged bow-shot, it can fire 6 shots before having to be reloaded. This enables one, with some preparation, to quickly dispatch weak mid-range opponents. Notably effective versus players unless they possess heavier armor.