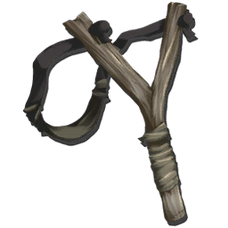 The Slingshot is the first ranged weapon available to players in ARK: Survival Evolved. It's a short-to-medium range weapon that uses

Stones for ammo. Compared to other weapons, it's most notable for its ability to inflict Torpor

, making it ideal for early tamers.

Slingshots are used to inflict Torpor from a distance. A successful shot will inflict 1.35 times the dealt damage in Torpor (i.e. 18.9 points of Torpor for the primitive version and fully charged) onto your target, while only dealing a low amount of damage. This is perfect for safely immobilizing small creatures and players. Once unconscious, creatures are defenseless, and are able to be tamed or killed.

It is most effective if used for headshots.