This article is about Smoke Grenade, not to be confused with 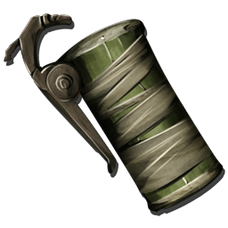 The Smoke Grenade is one of the explosives in ARK: Survival Evolved. It explodes five seconds after being thrown. It doesn't deal any damage, but covers the surrounding area in smoke. Smoke grenades can be thrown into windows or over walls to distract other players.