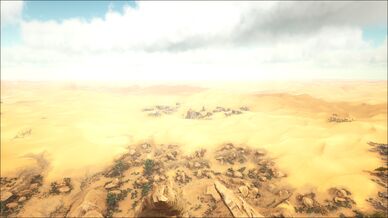 The South East Dunes is a region in Scorched Earth.

The Dunes surrounding the entire map are among the hottest and most dangerous areas to explore. Water is scarcest here, with only a handful of water veins to tap. Other resources are scarce too, especially any vegetation, with mostly empty space for miles around. Players will likely find setting up a base in the South East Dunes to be far more difficult for this fact alone. It is also home to the deadly Deathworm, which can strike unwary travelers. The South East Dunes are also home to the Ruins of Nosti, a location featured prominently in much of the map's story, as well as the home to a few of the authors of the Explorer Notes. Perhaps even more noteworthy for the common survivor, hidden beneath the city's rubble lies one of the three caves in Scorched Earth.

While basic livable resources such as food, water, or wood are rare, the one plentiful resource is that the South East Dunes allow Wind Turbines to be powered 100% of the time. One should keep in mind that although there are water veins in some oasis, the ability to grow food or even put crop plots down is impossible.

Deep Sea Loot Crates can be found in the South East Dunes.

The Dunes border the whole map, but generally border on the more dangerous locations of Scorched Earth. Of particular note, on the western edge, the World Scar is sandwiched between the Dunes and Mountains, forming a natural barrier that one must either fly over, walk around, or use one of the few natural bridges available.