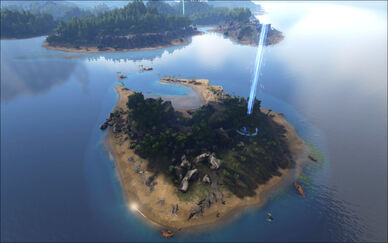 This island's in-game name is "Wilderness", but is often referred to as South Haven, Southern Island, The Lone Island, or Herbivore Island (but is most commonly referred to as Herbie). Damien's Atoll is the Spawn Entry name and its name on the official cloth map, but the name doesn't show during gameplay. Like the popular name Herbivore Island suggests, its relatively safe since carnivores do not spawn there. However, large herbivores like the

Brontosaurus could become aggro and harm survivors. The island's small space and skittish herbivores make for easy hunting. This island is also a good place to complete the “Photography: Herbivores” quest. There are also a good number of metal-rich rocks on the island's single hill. Its bay is deep and great for setting up a port or an aquatic creature pen. The land right on the bay is flat and great for basebuilding, but take care not to build too close to the cliffs, or you'll lose your supply of metal.

The island is directly south of the Southern Islets. The distance from the mainland and lack of carnivores make the island a perfect location for early players or peaceful tribes. This island is rich in metal nodes and is one of the most consistent places to easily obtain metal early on, accessible by swimming (it takes roughly 40 seconds to swim to the island from its closest mainland point with 120+ movement speed) or if you can craft a raft.

Paraceratherium/Mammoth: A levelled one, preferably with emergency medicine will be able to swim to the island with ease and take blows from any Megalodons or Mantas. Recommended to bring a water escort with you for protection.

Sarcosuchus/Beelzebufo: Both semi-aquatic mounts will bring you to the island safely, the former will have enough health to survive Manta swarms by getting by on land. Be cautious as aggravated herbivores can cause them harm.

Basilosaurus: By far the best if you wish to tame or explore on the island, you can confidently leave it alone in the crescent cove and it will tear any predators that attack it apart.

Baryonyx: Baryonyxes bred and leveled for health, stamina, melee damage and speed can easily take on

Manta swarms and even some

Megalodons. On land they lose the area stun attack but are still very reliable. Since the water area around the island can be used for Raw Fish Meat and even Raw Prime Fish Meat gathering, it is very recommended that you bring a bred

Baryonyx "swarm", a.k.a. riding one and having multiple

Baryonyxes set to follow and preferably set to passive until ordering to attack the prey. Very efficient since player can choose which one to mount when one goes out of stamina.