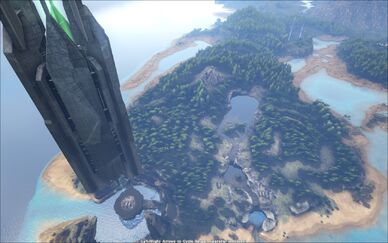 The Southern Jungle consists of dense forests and contains a lake with a river to the south leading to a waterfall just before the ocean. In the south-western edge the red Obelisk is located. Few dangers on the beaches nearby make for a good camp, but therizinosaurus and raptors prove annoying, although access to the red Obelisk and swamps can be rewarding as well.

The Southern Jungle is forming the South-Western coastline and borders to Craggs Island in the south-western edge.

Therizinosaur, Carnotaurus, and Raptors can do damage in groups, scout jungles before headed to the red Obelisk or making camp.

Piranha spawn in rivers and can mean death if forced in rivers by Therizinosaur or Chalicotherium. (i was unsure whether or not Piranha should be added to creature list because of their habitat and i am unsure of there abundance, keep eyes peeled)