This page is designed to explain how to use and read the information on the Creature Spawn Maps.

All group names for creatures and spawn areas are taken from the DevKit, so some of them may look a little weird.

This guide will walk you through the basics of the spawn map. For this example, we will be looking at the spawns of Ankylosaurus on The Island. 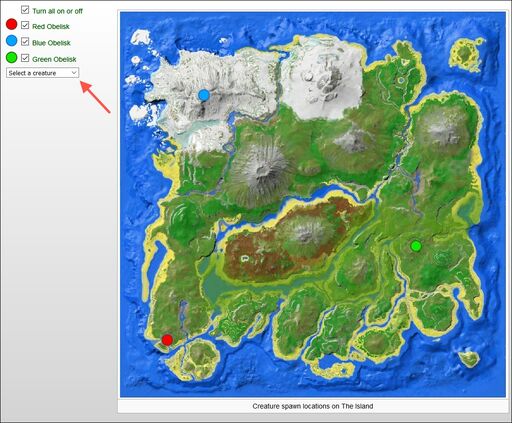 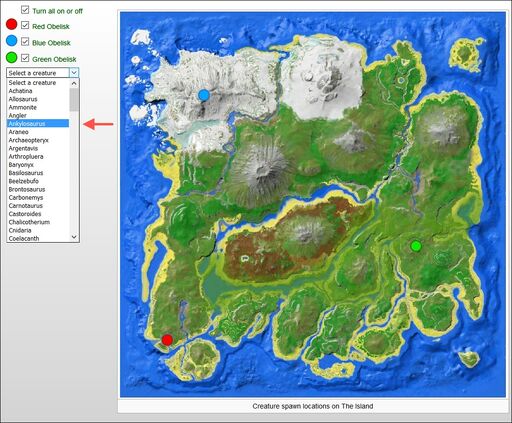 We start by clicking on the drop-down list to select a creature. Every creature is available in the list, including variants such as Unicorn and Yeti, but it is currently not possible to have multiple creatures displayed at once without viewing the full spawn groups (explained in a later step). We're going to select Ankylosaurus for this example. 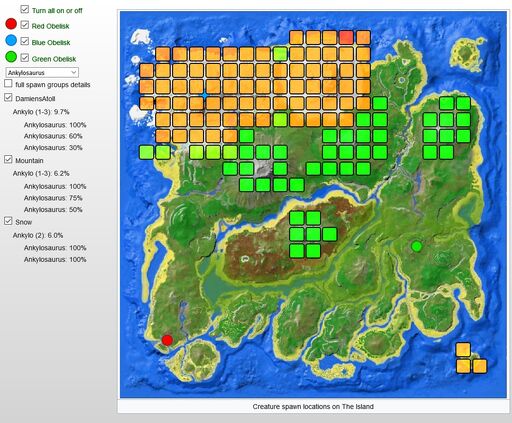 There are now multiple colored rectangles overlaid on the map. Each of these rectangles represents an area that the Ankylo can potentially spawn in. Anywhere without a rectangle has no Ankylo spawns, although they can wander a short distance outside of a rectangle. If you hover your cursor over one of the rectangles, it will display the coordinates of the upper-left and bottom-right corners of the rectangle. If it is a small circle instead of a rectangle, it represents a specific point where the creature can spawn, rather than an area (such as a Thylacoleo spawning on a tree), and hovering will display that coordinate. The color of each rectangle represents how common a creature is in that rectangle based on the max number of that creature that are allowed to spawn in that rectangle and how big the area is. The closer to green each individual rectangle is, the more common the creature will be in that area, and the closer to red, the rarer. 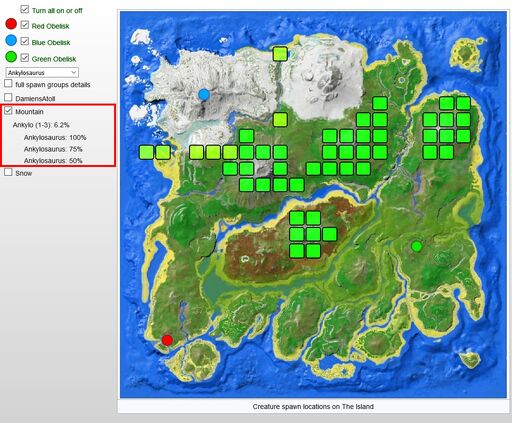 Please note that while the spawn amount for this creature in this spawn group can be up to 3, with the chance decreasing linearly, each creature and spawn group will have their own amount and percent chances, so this formula should not be applied universally. Some creatures, such as Raptor are guaranteed to spawn in groups in certain areas. 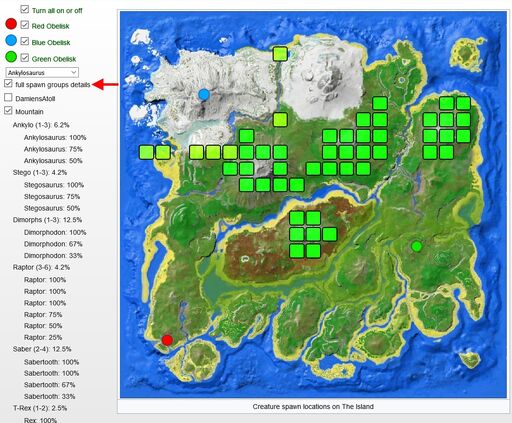 Keeping in the Mountain spawn group for our Ankylo, if we check the "Full Spawn Group Details" box, we can see what other creatures share this same spawn group, and see what is most likely to spawn in these areas. Looking at this screenshot, we can see for example that a Saber is twice as likely to be chosen to spawn compared to our Ankylo, at 12.5%. The screenshot does not show the whole list, but a Procoptodon has a much lower chance to spawn in these areas, at 0.9%.

There is always a chance an Alpha Creature will spawn in place of a normal version. The chances are as follows1:

1Custom maps may have different values

Each creature has a percent limit to how much of a spawn group it can make up. The Ankylo, for example, can not make up more than 15% of the actual global spawns of the mountain spawn group. These spawn percent limits are currently not displayed on the map, but may be integrated at a future date.

Some creatures, such as Giganotosaurus, Quetzal, Unicorn, and Titanosaur have exact global limits, so they can't naturally spawn more than a certain amount.

If you have further questions about how to use the Spawn Maps after reading this guide, please post on this article's talk page.