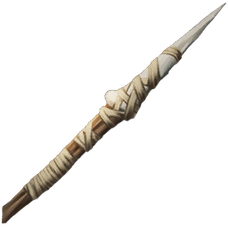 The Spear is the first available weapon in ARK: Survival Evolved. It is a critical item in the early game as it is the strongest melee weapon available until the Pike at Level 25, and the strongest ranged weapon until the Bow at Level 10.

The Spear can be used as a melee weapon using the Fire button (Lmb,

), or it can be thrown by holding and releasing the Alt Fire button (Rmb,

The downside to the Spear is that it has a 3.5% chance to break whenever the survivor lands an attack with it, which can be very dangerous when it happens mid-combat. For this reason, beginning players are recommended to always keep more than one spear ready at any given time. If the Spear is placed on the action bar, the player can easily craft new ones on-the-go whenever they run out (provided they have the materials). Placing the Spear's Engram on the action bar as well will allow crafting of new spears even before running out.

Thrown Spears have a 5% chance to break on impact, but can otherwise be re-collected from where they landed (unless it hit a living and conscious creature or player). Be aware that thrown Spears will naturally decay after a certain amount of time if not picked up.

A survivor can harvest materials off a corpse by using the Spear on a body. It functions in a way similar to a Stone Pick, as it yields more Meat than Hide when used in this manner. However, it is not advised to harvest materials with the Spear, as Picks and Hatchets are more effective and can't randomly break.