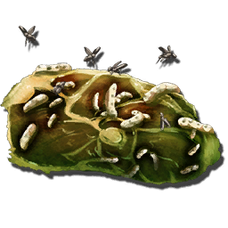 Spoiled Meat is a food item in Ark: Survival Evolved. It can be created by letting

Cooked Lamb Chop, or any

Jerky spoil. Spoiled meat can also spoil, at which point the item will disappear from the player's inventory.

As a food item, Spoiled Meat is the very last resort; eating it will restore 3.5 points of

Health by 12.5 points. Because of this, Spoiled Meat is not initially worth much to the player.

However, it is a good idea to keep some lying around in a

Storage Box, because it has several important uses later on. For example, one Spoiled Meat can be combined with 5 ×

Mortar and Pestle to craft

Narcotic, which is an essential tool for taming.

Spoiled Meat also is the preferred food of the

Karkinos. Feeding Spoiled Meat to them will tame it more quickly than feeding it with

Raw Meat would while refilling the same 50 food points.