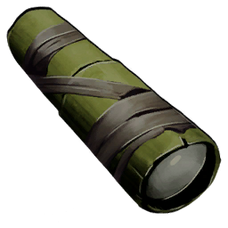 The Spyglass is a tool in ARK: Survival Evolved that allows the player to see faraway players, creatures, and landscapes.

The Spyglass is often used in-game while taming to see possible tameable beasts far away, and to check the level of a creature in order to decide whether it is approachable. This is particularly valuable in hunting dangerous creatures such as Carnos and Rexes, as well as flying creatures like Argents, Pteranodons, and Quetzals.

It can also be used to see the owner of structures from an increased distance.

While looking at a player or a creature through the spyglass, you can use the "Attack This Target" whistle (default: .) to command a creature to attack a distant target.

The spyglass can be used to show the gender of the creature you wish to tame, allowing you to hunt for mates to your dinosaurs for breeding.

The Spyglass is also useful to call tamed flyers down, when a rider disconnects from the game or is knocked off or killed while in flight. The rider will have to look at the tame through the spyglass and then either whistle it to follow or land.

In ARK: Survival Evolved Mobile, the Spyglass can also be used to check a Creature's