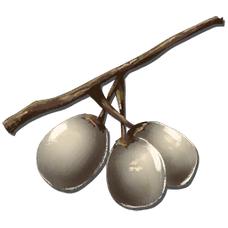 The Stimberry is one of the

Berries in ARK: Survival Evolved. It can be found by harvesting flora around the island.

Upon consumption, the Stimberry restores 10.0 points of

Torpidity and 5 points of

Stamina. This can be useful to stop you from passing out after eating

Narcoberries or being poisoned when fighting a Scorpion. Eating Stimberries can also be used to counteract the effects of Tranquilizer Arrows in PVP combat.

Water by 10.0 points, so they quickly dehydrate the player if eaten in large quantities. Eating these in a large quantity when hungry is only recommended when near a water source. They also provide 1.5 points in

It is not advised to use Stimberries for taming. Although they can be eaten constantly, without the need to wait that the food stat drops, their affinity gain is much lower than other berries, let alone Kibble. The result is a massive drop of effectiveness (i.e. bonus levels) and a very high consumption of Stimberries.

If they are force-fed to an unconscious creature, they reduce the creature's Torpidity, which makes it wake up earlier. this can be used in an usually futile attempt to wake up a creature should they be submerged underwater or even damaged during the taming process.