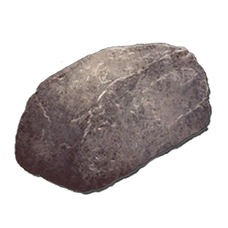 Stone is one of the resources in ARK: Survival Evolved used for crafting and as ammunition for the

Small stones are scattered on the ground and can be collected by hand. Stone can also be harvested from rocks using tools, such as a

Pick or more efficiently with a

Hatchet. There is often no correlation between the size of a mineable rock and its yield.

Stone can also be gathered autonomously by a

Doedicurus, either set to wander, or parked next to a suitable rock.

Stone is also a common production from a

Stone is used in many of the early tools and structures and for creating more advanced crafting resources, and is used quite commonly, even in the late crafting tiers. Stone is also used as ammunition for the

Slingshot, the first ranged weapon available to a new player.

It is also used as a food diet for both

Stone is used to craft a lot of items, including:

The following creatures reduce the weight of Stone by the listed amount while it is in their inventory: