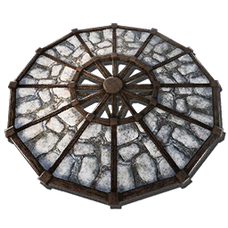 The Stone Cliff Platform is a structure in the Aberration DLC of ARK: Survival Evolved. It is a big platform that can be placed on vertical walls in order to build a base there.

When hanging from a vertical surface, the Cliff Platform can be placed below the survivor.

Tree Platforms. Structures such as the

Wooden Wall cannot be directly placed onto the Cliff Platform. In order to build on the platform, you must first place a foundation such as a

Wooden Foundation, and then you can place other structures on top of it. Walls will not snap to the edge of the cliff platform; however, placing Fence Foundation will allow walls to be placed at the edge of the platform.