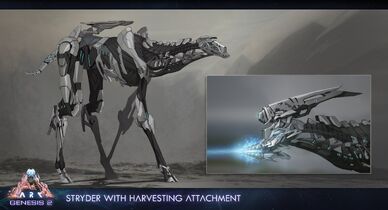 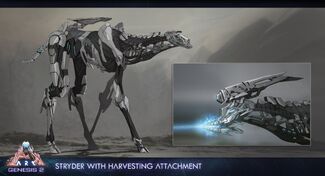 The Stryder is a creature in Genesis: Part 2.

The Stryder will feature a wide array of abilities, depending on the attachments it is equipped with, very much like a Mek. Certain attachments allow it to become more efficient in harvesting, while others turn it into a combat machine.

The Stryder's attachments allow it to take on the appearance of certain creatures, such as a

The Stryder's information is currently unknown, because it is unreleased and not yet in the game.

This section describes how to fight against the Stryder.

You must hack the Stryder to tame it, which will promptly alert other Survivors in a nearby radius. This may leave you and your Stryder open to enemy attacks or trolling.

The Harvesting attachment allows the Stryder to shoot a laser at an object (EX: trees or rocks) that instantly disintegrates the object and sends it to the Stryder's inventory.