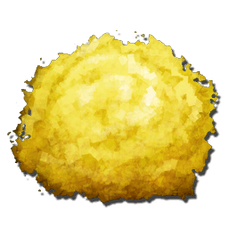 Sulfur is a resource in the Scorched Earth-DLC of ARK: Survival Evolved. It is also present on the Extinction and Valguero maps.

Sulfur can also be used to tame a

Rock Elemental, is eaten by the

Phoenix once it is tamed.

Sulfur can be found by mining small yellow-streaked rocks, typically found high in the mountains. See the interactive Resource Maps for node coordinates on available maps.

Sulfur can also be obtained by killing