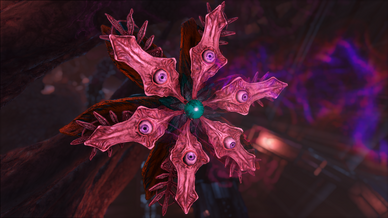 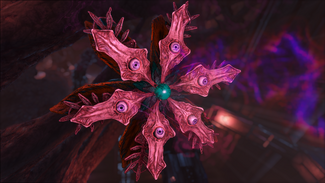 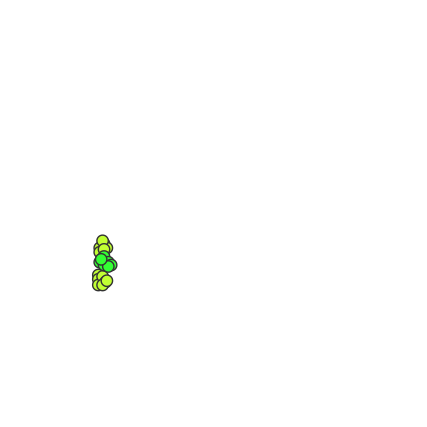 The Summoner is a Creature in Genesis: Part 2.

The Summoner patrols the Rockwell's Innards Biome. They are extremely aggressive when its attention is roused, first teleporting in front of the aggravated survivor with a large scream.

Macro-Summoner (Choose Your Own Adventure boss)[]

mission, physically towering other Summoners in size, shielded from all damage.

It is accompanied by two other Summoners that can be either green, pink, blue, or yellow. Stepping on a panel of a matching color drops the shields of the respective Summoner. Killing both guards drop the shields of the Macro-Summoner allowing you to kill it for a short time frame, restarting the mini-game once they're back up.

This section displays the Summoner's natural colors and regions. For demonstration, the regions below are colored red over an albino Summoner. The colored squares shown underneath each region's description are the colors that the Summoner will randomly spawn with to provide an overall range of its natural color scheme. Hover your cursor over a color to display its name and ID.

This section describes how to fight against the Summoner.

Summoners float around, patrolling the inhospitable Rockwell’s innards biome, they fly half-open so that they produce a spotlight. Whenever a survivor is daring enough to go into the searchlight the summoner will enter attack mode. When in ‘attack mode’ the summoner will fire projectiles at the target BUT while doing so it will be completely invulnerable. Sometimes the summoner fires a globular projectile onto the ground. This projectile summons a set of fleshy creatures that fight alongside the summoner. The summoned creatures vary from

Commonly after using an attack or after a set period of time, the Summoner drops its shield and becomes vulnerable. The shield will either reactivate over time or once a damage threshold of 25% is met. This means it will always activate its shield at 75%, 50%, and 25% health. These damage thresholds can't be bypassed, meaning that a low-level Summoner can take as long to kill as a high-level Summoner.

is picked up in the biome, 2 max-level summoners are spawned to attack the culprit.

It's highly advised to avoid them at all costs. If you are caught in a Summoner's spotlight the best thing you can do is run but be prepared to take on the summoner’s creatures. Shooting their summoning projectile before it lands can prevent their summons from spawning. If you have long-range weapons available, you can fight it off, but since it takes a while due to its shielding mechanics, it's ill-advised unless you're miraculously able to handle all of the other hostiles in the area.

While the Summoner's attack projectile can be dodged (but still hurt if it hits), the biggest danger lies with the creatures it summons with. The projectile cannot be intercepted (it seems it can be shot down with certain weapons though?), and spawns several creature upon impact after a few second, ranging from almost every creature, and including dangerous creatures such as Basilisk. All summoned creatures retain their abilities (like

Bloodstalker's grappling hook at hostile targets), making it more difficult to deal with.

Macrophage, the random aggressive Tentacles that appears at ground, and

Tek Leggings if they get too close).

Summoner's shield drops every now and then, making it vulnerable to being attacked. Killing the Summoner also kills off every creature that was summoned by that specific Summoner. Outside of its summons, the Summoner's damage output is not that high.

They also do not have the shield when patrolling. Striking the Summoner before it spots you will reduce shield drop phases by one.