Survival of the Fittest: Unnatural Selection 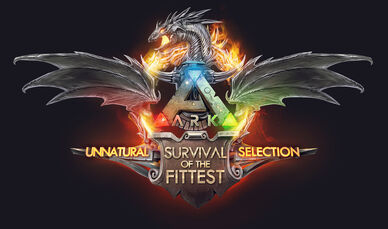 Survival of the Fittest: Unnatural Selection was a four-day ARK: Survival Evolved battle event where players competed for their lives in the Survival of the Fittest game mode. It took place on Official "Unnatural Selection" Servers and included three days of preliminary battles, followed by a Championship Tournament on Wednesday, September 2. Players had the chance to win over $30,000 in cash and Steam gift cards.

The Official ARK Wiki will be live-updating the live/dead status of tournament participants and tracking which Evolution Events occur during the competition.

To watch the Tournament, visit the SurviveTheArk Twitch channel.

These were used by the Game Master:

From Saturday, August 28, through Monday, August 31, players will battle in 4-member tribes against hundreds of other players - similar to the regular Survival of the Fittest mode. To participate in the open-preliminary matches, just join one of the "Unnatural Selection" servers on the Official Server list. Each of these battles will last 2.5 hours, and the winning tribes from each battle will advanced to the Championship.

The Survival of the Fittest: Unnatural Selection Championship Tournament will take place Wednesday, September 2, at 2:00 pm EDT. The final 163 players will compete in a match that will be streamed on ARK’s Twitch channel. The final event will take 4.5 hours.

Survivors will compete to win:

In the pre-lobby of the event, Tribes with less than four members will have the opportunity to ally with another Tribe as long as the final member count does not exceed four players. Once the tournament begins, forming alliances is prohibited. All 163 players that make it into the final Championship event will receive a $100 Steam gift card.

Competitors will witness distinct game updates, most noticeably six new world changing Evolution Events and the first appearance of the Dragon! Midway through the match, the Dragon will become available for taming at the central platform. Beware as it can only be ridden for a short time before it turns on its master. Furthermore, the dragon will reappear during extended sudden death to eliminate all remaining survivors if they are not sufficiently murdering each other.