Survival of the Fittest Tournament

Edit
Survival of the Fittest Tournament 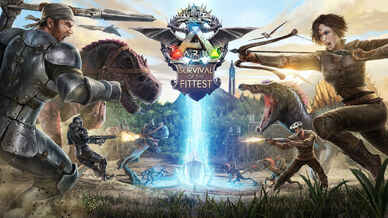 These were used by the Game Master after being voted for on Twitch:

At the start of the tournament, survivors will find themselves in a lobby container where they can strategize and confront their enemies. After a period of time, they will be beamed down onto a spawn platform with valuable loot placed in the center. From there, tribes will have to decide if they want to dash for the gear or get a head start on escaping into the wilderness. As the game progresses, a large force-field surrounding the world will shrink. Survivors that attempt to pass through the force field will be killed. The tournament is expected to last over 4.5 hours.

Battle mode differs from other ARK game modes in that the game takes place at an accelerated pace, with leveling, gathering, taming, and building happening at quicker rates. Engrams, craftables, and supply drops have been rebalanced to make them more viable, and stats have been altered so tamed dinosaurs are no longer as powerful. Battle mode players will take less damage, along with other statistical alterations. There is no fast travel or respawning, and players will only have one shot at winning the tournament. In addition to the normal dangers that players face in ARK, survivors will have to look out for the Game Master.

The Game Master will communicate with the outside world to decide upon and unleash Evolution Events, which will take place every 30 minutes. The events range from freak weather occurrences, dinosaur stampedes, day/night shifts, and player location reveal.

Studio Wildcard's Kayd Hendricks and Twitch's Alex "Goldenboy" Mendez hosted the live tournament from Twitch headquarters in San Francisco, CA. The two hosts delivered play-by-play commentary from a roaming spectator point-of-view, and interviewed the winners after they exited the battle.