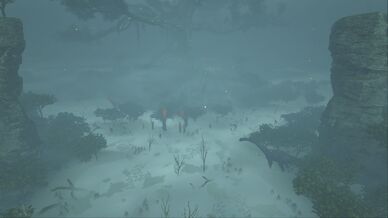 The Bog is a region in the Genesis: Part 1 DLC.

The Bog, or Swamp Biome is the starting biome of Genesis: Part 1. It’s labeled as the easiest section of the map, however is on par with the swamps on The Island and other maps in terms of difficulty. Unlike other sections of the map however, there are no climate difficulties such as cold, heat, or radiation. While it is considered one of the more difficult biomes, it is a simple one when compared to the other biomes.

Although labelled as 'easy' by the game, the bog can be a challenging start point due to the creatures that spawn here. Resources are usually easy to find, but the frequent high level sarcos, kapros, barys and x-raptors, coupled with low render distance, can lead to frequent deaths and loss of early tames.