This article is about Tapejara Tek Saddle, not to be confused with 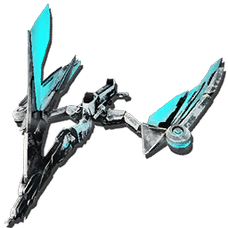 The Tapejara Tek Saddle is used to ride a

Tapejara after you have tamed it. It is an upgraded version of the

Like the primitive Tapejara Saddle the Tek Saddle has also three seats. One shot with the laser gun consumes 4% of the equipped element, that means that you can shoot 25 times with one element. See more information on saddles at the Saddles page.

In addition to providing more armor than the regular saddle, pressing the melee key (default Ctrl) while riding a Tapejara with the Tek Saddle will activate a laser helmet.

However, such functionality does not exist in ARK: Survival Evolved Mobile, and the saddle is instead used as better armor for the

The engram can be unlocked by killing the Dragon on Gamma difficulty, the Manticore on Beta or the Ice Titan.