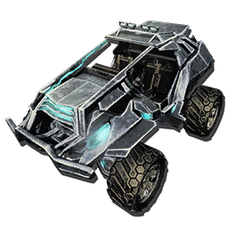 The Tek ATV, formerly known as Dune Buggy, is a driveable modern vehicle with storage.

The Tek ATV Tekgram is the reward for defeating the Overseer on Alpha Difficulty. As the Tekgram for the vehicle exists, it can be added manually to a server and is also rewarded after an alpha ascension in single player.

The Dune Buggy was added into the game in patch 207.0, but removed completely in 209.0 for debugging. It returned in patch 258.0 and was remodeled to have a Tek Tier design.

The Tek ATV was removed from offical servers at some point.