Tek Boots is referred to as "TEK Boots" in ARK: Survival Evolved Mobile 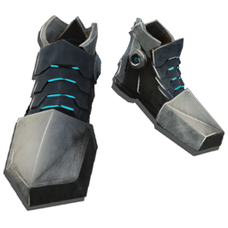 The Tek Boots are a feet-slot armor piece from the Tek Armor set.

When equipped and powered with element, the Tek Boots absorb any fall damage, which means the wearer can fall on the ground from any distance unharmed. You can also climb mountains with the Tek Boots (Each step produces a bluish shock wave). As soon as you climb on a slope, lights are activated under your boots and heavy footsteps are heard.

To charge the boots with element, drag element over the boots icon. One element will give you 100% charge.

In ARK: Survival Evolved Mobile, the Tek Boots provides the survivor with a +10% speed increase, a +10% damage increase, and a -20% fall damage decrease when powered. However, it does not enable the wearer to scale steep surfaces.

The Engram unlocked by defeating the Beta Broodmother Lysrix, Beta Rockwell, or the Desert Titan and must be unlocked in order to equip this item. Defeating the more difficult versions will also give the player the engram.