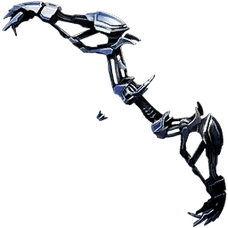 The Tek Bow is a weapon in Genesis: Part 2. It is capable of firing various Arrows, including a new Explosive Arrow. The survivor must have learnt its Engram before being able to use it.

It can be fueled by Element Shards, which is consumed at varying rates depending on the type of Arrow that is being fired. The Arrow flies faster the longer you charge it up (1 second) and at its highest speed it has the speed of a Bullet.

The type of arrow being fired can be changed by pressing

on the Xbox One, or R on the PC version. The type of arrows able to be fired are normal/metal arrows, explosive arrows, tranq arrows, and flame arrows. Double tapping the button to swap arrow types also changes how the arrow flies. There is projectile mode, which fires like a normal projectile arrow, and then there's instant hit mode, where the arrow will instantly hit what the player is aiming at.

Element Shard are used to fuel the bow.

You don't need any arrows in your inventory as the element power will form the corresponding type of arrow you selected. Press Reload button to switch to the next type of arrow.