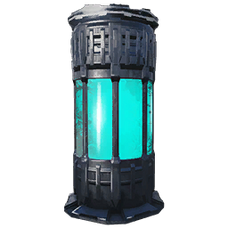 The Tek Canteen is an improved version of the

Canteen. It holds 3 times more water than the canteen. and the water is always providing a warmth or cooling effect.

To drink from the canteen, highlight it in your inventory and select Use Item, or put it on your hotbar and press the designated key. This can be done 9 times for 100 water each before depletion, but only if your water isn't full.

Drinking from a tek Canteen increases your Hyperthermal insulation by 84 and decreases your hypothermal insulation by the same amount, which makes it easier to survive in the heat of Scorched Earth days, but more difficult during the cold nights. It also gives a stamina drain reduction buff that lasts a minute, this applies to both iced and hot tek canteens.

You may change the canteen to keep the water warm by hovering over it and going down to the mode option but it will deplete your current water from it ; the effects are the opposite plus freezing immunity for a short duration.

The Tek Canteen will lose water on Scorched Earth, the same as all other water containers.