Tek Chestpiece is referred to as "TEK Chestpiece" in ARK: Survival Evolved Mobile

This item is part of the Tek Armor set. 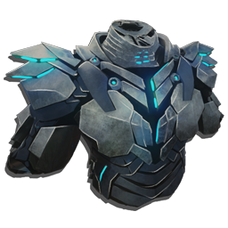 The Tek Chestpiece is a chest-slot armor piece from the Tek Armor set. It offers the most protection of all chestpieces and has a built-in jetpack.

If double-pressing the jump button while wearing the Tek Chestpiece, the jetpack is activated and the wearer is boosted into the air. Once in the air, the wearer can hold down the jump button to float and move around in midair. If ⇧ Shift /

is held while in-air it activates Hover-mode, allowing you to take precise shots while at a high vantage point, or fly at a maintained altitude.

If both the Tek Chestpiece and the

Tek Leggings are equipped, the wearer can press and hold Ctrl /

while in midair to move forward in the air very fast.

The jetpack can also be used while underwater to boost swimming speed.

In ARK: Survival Evolved Mobile, the Tek Chestpiece provides the survivor with a +10% speed increase, a +10% damage increase, and a -20% fall damage decrease when powered. However, it does not function as a jetpack.

The Engram is unlocked by defeating

Crystal Wyvern Queen (Alpha) and must be unlocked in order to equip this item.