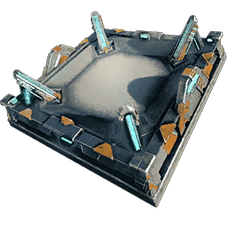 The Tek Crop Plot is a structure in Genesis: Part 2. It is the Tek Tier version of a Crop Plot. Federation Crop Plots help Plants grow quicker without the need of sunlight, while having a greater storage capacity. Tek Crop Plots also refrigerate Plants, making them more self-stable. Additionally, Tek Crop Plots have a maximum Greenhouse Effect of 500%, making them 1.5x faster and more efficient than other crop plots.

In order to grow a crop, you will need four things:

Once the plot is irrigated and fertilized, you can place the seed in its inventory and it will be planted after a few seconds. In the case of Species R, the tentacles will sprout immediately to be harvestable.

The plant will mature through several stages over the course of several day cycles, and once it has reached Fruitling status you will be able to harvest it continuously.

Once harvested they will slowly grow back until reaching the maximum yield again. In the case of Species R, the tentacles can be damaged like tree for meat resources (based on what kind of Species R was planted) until it is depleted for 30 minutes+.

To change the current plant, access the radial menu by holding 'E', then select 'destroy plant'. This will allow a new seed to be planted.