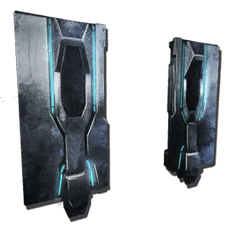 The Tek Doorframe is a structure in the Tek Tier-building set and the final unlockable doorframe. A doorframe functions as a wall, providing structure to a building and enclosing an area, but with the addition of an aperture to allow entrance and exit.

A Tek Doorframe can be placed on any

Ceiling (with the exception of the

Thatch Roof), or another wall.
A

Door can be placed in the hole and locked to provide a way to restrict access to the structure while still allowing you and your tribemates a way through.
A doorframe also provides support to allow a structure built on top of it to extend up to 2 ceilings in any direction on the x and y-axis, and up to 1 ceiling diagonally from a doorframe which is directly above a foundation.