Tek Gauntlets is referred to as "TEK Gauntlets" in ARK: Survival Evolved Mobile 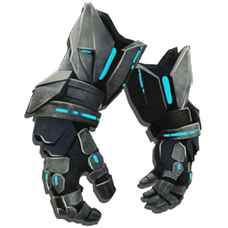 The Tek Gauntlets are a hands-slot armor piece from the Tek Armor set.

When wearing the Tek Gauntlets, the wearer can perform a super punch by holding Right-Click Rmb (PC) and releasing when you see a green crosshair on your target, which has a base damage of 40 and scales with the melee stat, this attack can damage multiple enemies if they are in close proximity. When targeting trees and rocks, the punch can also be used for harvesting. You can also use this with Tek Leggings to perform an attack from above.

If you are fully encumbered, you can use the gauntlets to get into the air. Combined with the Tek Chestpiece and the Tek Leggings you can carry massive amounts of items across long distances.

The Engram is unlocked by defeating Gamma

Crystal Wyvern Queen and must be unlocked in order to equip this item. Defeating the more difficult versions will also give the player the engram. You can also get the item from The Mosa Proposal (Genesis: Part 1)