Tek Helmet is referred to as "TEK Helmet" in ARK: Survival Evolved Mobile 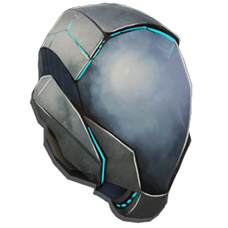 The Tek Helmet is a head-slot armor piece from the Tek Armor set.

Pulse Mode highlights creatures and other survivors around the wearer in a specific color to show the relationship to the wearer. Tribe members and creatures are highlighted in a green color, neutral players and creatures in white and enemies in a red color. The color of the outline also changes based on the current health of the creature/player, growing darker the more injured the target is. The helmet can scan through walls in a small radius around the wearer.

Night Vision Mode enables the wearer to see in the dark. Unlike the

Night Vision Goggles, the display does not turn white when using night vision during daytime.

In ARK: Survival Evolved Mobile, the Tek Helmet provides the survivor with a +10% speed increase, a +10% damage increase, and a -20% fall damage decrease when powered. However, it does not have a targeting system and does not act as

The Engram is unlocked by defeating Alpha Broodmother Lysrix, Beta Rockwell, Alpha Moeder or Ice Titan and must be unlocked in order to equip this item.