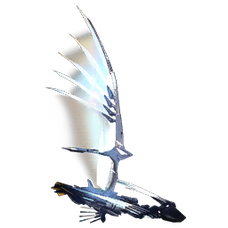 The Tek Hoversail is a deployable Vehicle in Genesis: Part 2 that can be used to travel great distances in style. It is able to host two Survivors, one that controls the vehicle and one that can use Weapons from the front.

Hold SHIFT to speed up. Hold S for a short period of time to stop. Pressing W or LMB will resume movement. Hold RMB to drift. Holding SPACE while airborne will cause the Hoversail to hover. Press SPACE to jump, then press and hold SPACE again to hover. The Hoversail must be moving forward while hovering in order to gain altitude. The Hoversail can hover for a limited period of time(~8 seconds) before needing to land to recharge.

While airborne, use LMB in combination with the directional (WASD) keys to do tricks. Performing tricks gives extra time for hovering and a speed boost upon landing.