Tek Leggings is referred to as "TEK Leggings" in ARK: Survival Evolved Mobile 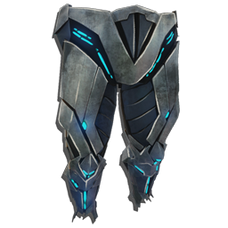 The Tek Leggings is a leg-slot armour piece from the Tek Armor set.

By wearing the Tek Leggings and holding down Ctrl /

When the player is over-weighted and is unable to move, holding down Ctrl /

(Melee keybind) will allow them to continue moving slowly.

In ARK: Survival Evolved Mobile, the Tek Leggings provides the survivor with a +10% speed increase, a +10% damage increase, and a -20% fall damage decrease when powered. However, it does not function as a means of superspeed.

The Engram is unlocked by defeating gamma

Crystal Wyvern Queen and must be unlocked in order to equip this item. Defeating the more difficult versions will also give the player the engram.