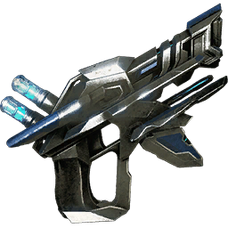 The Tek Phase Pistol is a Close-Range weapon in Genesis: Part 2. It shoots out a beam, which affects its target differently depending on its mode. The Tek Pistol has 3 different modes: killing, healing, and stun, and these effects are amplified by consistency of fire on its target. Rapidly clicking seems to deal more DPS and Percentage per Second conserving the Pistol's fuel.

Kill Mode deals high damage over time gaining a multiplier up to 20x damage on its duration being suited towards large targets.

Stun Mode adds "Stun Percentage" with Stun Per Second being reduced by higher drag weight upon reaching 100% the creature will be stunned.

To swap modes, press L2 on PS4, LT on Xbox One, and right-click on PC.