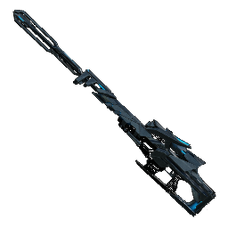 The Tek Railgun is an end-game ranged weapon in the Aberration DLC of ARK: Survival Evolved. It is the upgraded version of the

Element, each piece supplies the rifle with 2 shots.

Tek Rifle, it does not need to be reloaded at any time, but unlike the rifle, it will overheat after every single shot and has to cool down before it can be used again. It is worth noting that the Tek Railgun cannot be fired underwater, whereas the Tek Rifle can be.

The Tek Railgun has a built-in scope lens that increases the sight range when activated, similar to the

Scope Attachment for lower-tier guns. The scope lens also has a heat signature tracking function, allowing the scope to identify living creatures by tracking heat signature. To zoom in while aiming, use the scroll wheel.

It also has a toggleable x-ray feature, which can be used to see creatures through walls (under a purple hue), but this feature will consume the durability of the supplied Element, at a rate of 3%[citation needed].

This weapon also has a very powerful piercing ability, capable of shooting through 5 metal behemoth gates and killing a person on the other side.

It is not recommended to use the Tek Railgun as an all-around weapon, as it takes a very long time to cooldown. The Tek Railgun is very bad with swarms, and should be used on high health targets you seek to kill.

The Tekgram is unlocked by either defeating

Alpha Rockwell or the Desert Titan.