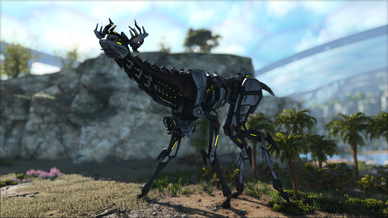 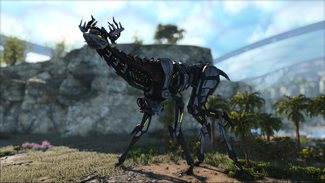 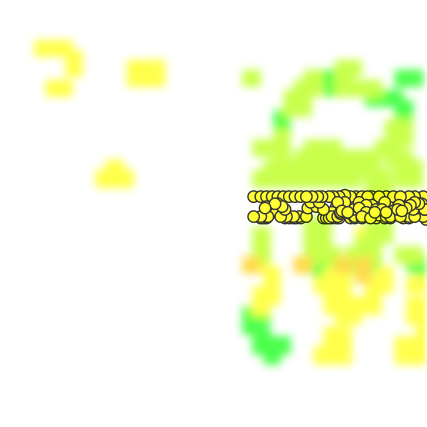 The Tek Stryder is a creature in Genesis: Part 2. These mechanical creatures come with two (out of 8 possible) different non-removable attachments, overall providing them a wide array of possible abilities.

The Tek Stryder features a wide array of abilities, depending on the attachments it has, very much like a Mek. Certain attachments allow it to become more efficient in harvesting, while others turn it into a combat machine. If attacked it will fight back with either a front stomp or a back kick.

Tek Stryder's appearance resembles a robotic deer, and an AT-AT from Star Wars.

Tek Stryder's attachments allow it to take on the appearance of certain creatures, such as a

This section displays the Tek Stryder's natural colors and regions. For demonstration, the regions below are colored red over an albino Tek Stryder. The colored squares shown underneath each region's description are the colors that the Tek Stryder will randomly spawn with to provide an overall range of its natural color scheme. Hover your cursor over a color to display its name and ID.

Tek Stryder explodes on death and leaves no body for resources to be collected from.

The Charge Capacity stat acts as an energy meter for the Tek Stryder's attachments' abilities.

This section describes how to fight against the Tek Stryder.

Paraceratherium even when weapon rigs are present.

Shoot from a ledge if you do not have the creatures to take the Stryder down. It is recommended to use powerful tames such as a

Spino to take them down. You can also use fast attacking and hard to hit tames such as the

Maewing to dodge their attacks but still deal damage.

Weapons which can deal large amounts of damage quickly are recommended. The

Pump-Action Shotgun is a good choice if you need to combat a Stryder on foot.

The Stryder has a lot of health, and is fast for its size.

The Stryder attack quite slowly and hit hard. They do not use any of the equipped rigs when wild. Fast tames such as the

Maewing which can avoid their stomps are recommended. If the player has access to powerful tames which can kill the Stryder quickly without taking to much damage such as the

Tek Stryders are "tamed" non-violently, rather than through the usual methods. This method is through a unique hacking process. To be able to hack into it to tame it, you must have a variable amount of

in the 0 Hotbar, and have cleared a certain number of missions. This number increases as the Stryder's level increases. You will be prompted to access a specific part of the Stryder to initiate the process (such as the head or one of its feet), and said part will emit electrical sparks until it is successfully hacked. Upon activating the hack, a large red circle centered on you will appear and you will have to remain close to the Stryder during the hacking process, keeping it inside the circle at all times.

While hacking, you will be prompted to do a minigame, while staying close to it. Successfully matching all the coding will increase the taming progress, up until it is tamed or destroyed. Failing the minigame will reset the taming progress to 0 and may stun you for a short amount of time. Regardless of whether the hack was successful or not, the Stryder will need to walk a certain distance away from the spot where the last hack was performed before a new one can be initiated. If the last hack was successful, the next part you will need to hack will emit sparks even before the Stryder can be hacked again, allowing you to prepare and access it as soon as you have the opportunity to do so. The minigame has lines of code scrolling vertically, with green squares. Left-click when the squares cross the horizontal line in the middle of the game. This will repeat with additional lines of code, keep matching the green squares until all the columns are completed.

In addition to the variable amount of Mutagel, each Tek Stryder has a prerequisite of a certain number of completed unique Missions to be tamed.

The number is only dependent on the total level of the Tek Stryder, and follows this formula:

All Tek Stryders comes with the following:

Tek Stryder has several features within itself:

Every rig uses Charge to slowly restore its usage capacity, and requires either to be recharged over time (slowly), or replenished with

For the gathering efficiency of the Excavation Rig, see

Industrial Forge, and Loadout Mannequin can be built on its back including feeding troughs, storage chests and beds. However, the saddle has a limit of 30 structures on its back. Every little thing counts from foundations to electrical keypads (including structures that are built alongside the saddle like ladders).

Weight inside the inventory of storage structures on the saddle is not ignored by the Tek Stryder. Take advantage of animals that have weight reduction capabilities to greatly enhance your overall carry capacity.