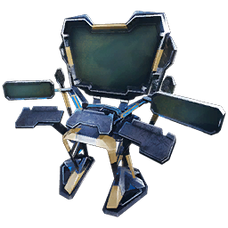 The Tek Surveillance Console is a structure in Genesis: Part 2. It enables the Survivor to monitor an area through a network of linked

Cameras, somewhat reminiscent of the Scout Remote. From these cameras, the Survivor is able to remotely interact with Structures and Creatures.

From outside of the Console, pressing E,

With a long press on E,

, the player accesses to the Wheel menu, which allows:

As the player has accessed to the Camera view, they have a wide view of the zone. A UI at the top left corner of the screen displays the main controls