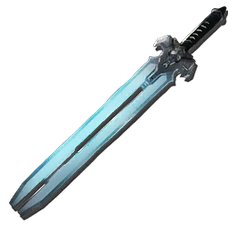 The Tek Sword is an end-game melee weapon in ARK: Survival Evolved. It is the upgraded version of the

Metal Sword and part of the Tek Tier item set.

To use it, you need to have learned the according Tekgram and have some Element to fuel it. The Tek Sword can be used whilst equipping a shield in the off-hand, making it very useful in hand-to-hand combat.

The Tekgram is unlocked by defeating both bosses in the Ragnarok Boss Fight on Beta or higher difficulty or defeating the Forest Titan.