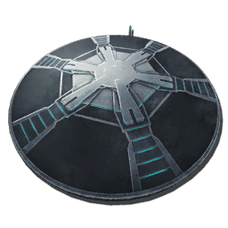 The Tek Teleporter is one of the structures in ARK: Survival Evolved that allows the teleportation of survivors and both wild and tamed creatures across the map. Wilds can no longer be teleported on official PVE servers.

The Tek Teleporter allows teleportation of survivors and creatures from one Tek Teleporter to another. There is no cost to operate the teleporter, but it does need to be powered by a

Enabling Public Teleportation allows other survivors not from the same tribe, who have unlocked the given engram, to use the teleporter. Though beware, if your own dinosaurs are on a teleporter with public teleportation, they can be teleported away by others, whether or not you own the teleporter. You should place your teleporter where your dinosaurs can get to, but if you plan on having it public, make sure that they are not on the pad unless you're using it.

When you teleport, the available teleporters on the pop-up will be shown as a bed icon. You can also rename your teleporter, which can make it easier to remember which teleporter is in which location. This will ensure that you know which teleporter you want to travel to.

Eery Element to craft and use, and can also teleport survivors into the Dungeons. The TEK Teleporter can be powered with an

The Teleporter is a very large circular disk, whose leading edge, where the activation post is located, must be placed on a foundation. The rest of the platform area does not require foundations underneath for placement.

Region 2 is not used
for this Object.

Region 4 is not used
for this Object.